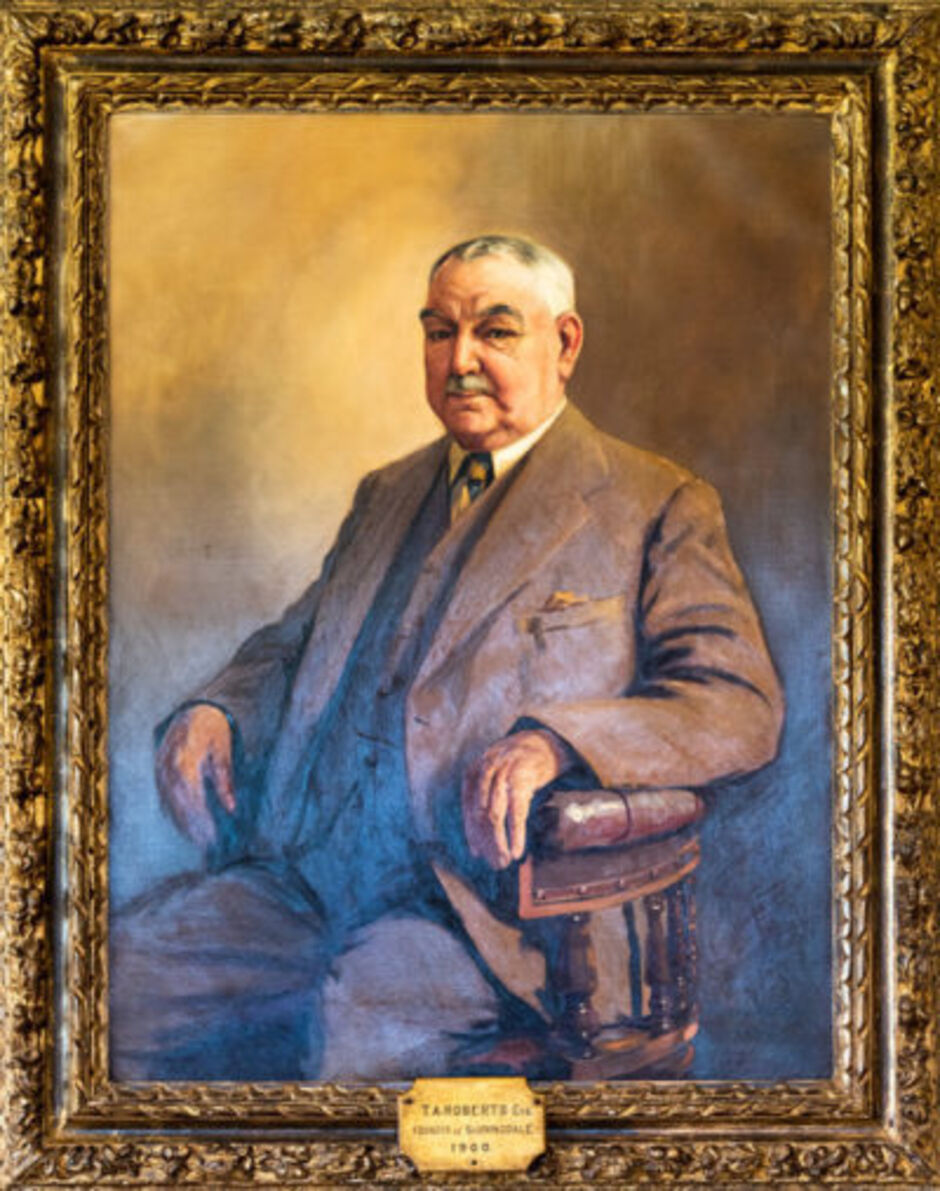 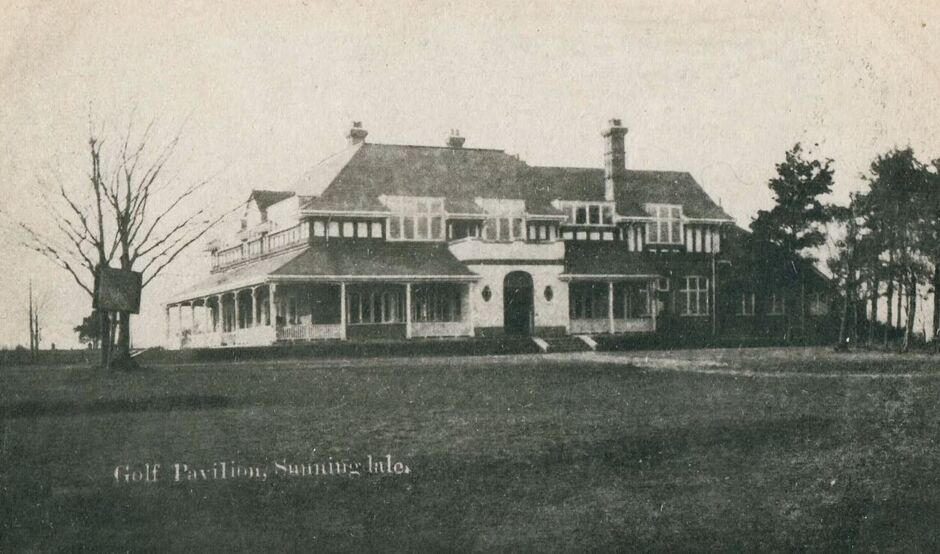 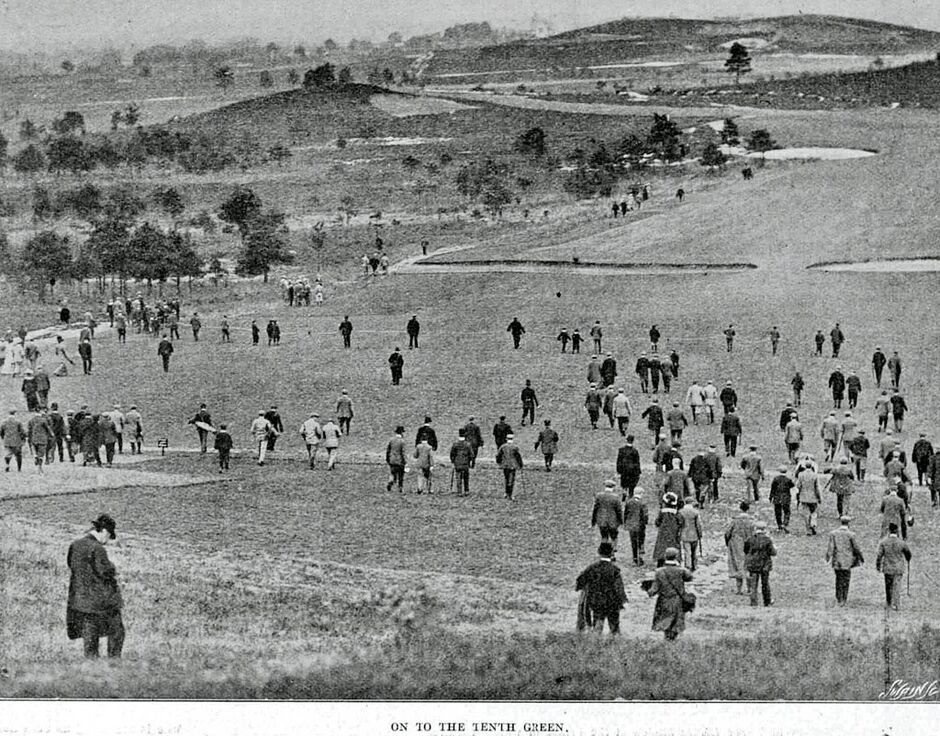 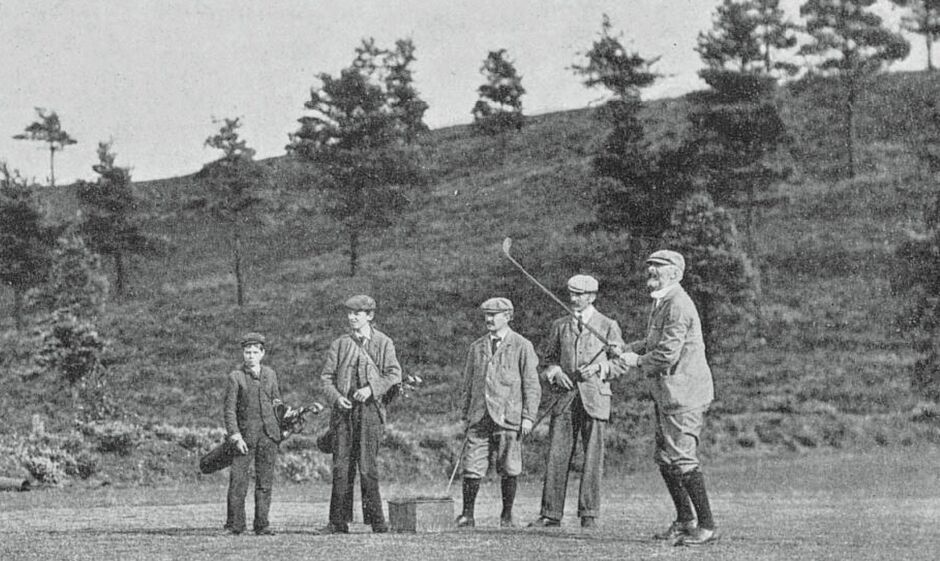 During 1899 two brothers, T.A. and G.A. Roberts built a house in Sunningdale called “Ridgemount”. The land on which it was constructed belonged to St. John’s College, Cambridge and mainly consisted of heather, gorse and pine trees. There were no shops, no railway station, and no Ridgemount Road, merely a bridle path over the property running, as it still does across the 2nd of the Old and continuing across to the 9th green of the New Course.

Soon after taking up residence, Tom Roberts, known as T.A., approached the College with a view to making a golf course, and to creating leaseholds on the adjoining land for the building of quality houses. By 1899 an agreement had been reached with the College, and a Founders’ Committee was formed with the Roberts brothers as promoters. A hundred keen golfers were soon found to subscribe for £100 bonds. A contract was signed with Mr. William Park Junior on 4th December, 1899, with orders to design and create a course of exemplary character for the price of £3000.

The first Annual General Meeting was held at the Café Monico in London on Thursday, 29th March, 1900 and the first Committee was formed. This Committee quickly approved plans for a Clubhouse “to cost with fittings not over £6,000, and a dormy house to be added afterwards at a cost to be decided on later.”

The Green Committee was empowered “to engage Mr. Hugh MacLean as foreman of the construction works for three months at 36 shillings a week and a cottage. “Mac” became foreman and remained in the service of the Club till he went into honourable pensionable retirement in 1940.

In readiness for the grand opening of the course, the Committee requested T.A. Roberts to approach Jack White, with a view to engaging his services as the Club professional.”Remuneration was not to exceed £1 a week, and a cottage on the links”. Jack White was then aged 28, and had been Professional at several Clubs. He was a brilliant player and frequently took part in challenge matches with other leading players of the day.

Since the formation of the Club the duties of Secretary had been performed on a part-time basis, but during 1901 it became clear that is was time to make a full-time appointment. A sub-committee was formed to appoint a Secretary. It received 435 applications, and invited six gentlemen to attend a selection meeting. At the Meeting Mr. H.S. Colt was selected as Secretary at a salary of £150 per annum.

In those days a major problem for members was transport. The motor car was in its infancy and members of the golf clubs springing up around London relied on the railway, and the horse drawn cab. The trouble for Sunningdale members was the London and South Western Railway timetable made no provision for the train to halt at Sunningdale and it steamed right through to Ascot. No amount of pleading with the railway’s timetable superintendent was of any use and the train continued to steam right on through. Then the Roberts brothers put their ingenuity to work. On hearing that the General Manager of the railway, a Mr Owens, was interested in golf, they offered him the first honorary membership of the Sunningdale Club – he soon gave the order for the train to stop at Sunningdale.

The first meeting of the Committee in the new Clubhouse was held on 20th September, 1901. It was an important meeting at which House, Green & Handicapping Committees were set up, and the duties of the Secretary, Professional, and Steward were considered and the Course was opened for play on Monday, 23 September 1901.

Jack White had recommended James (‘Jimmy’) Sheridan as Caddiemaster, a fearlessly outspoken Scot who arrived on a six weeks’ trial as caddiemaster and was still there nearly sixty years later waiting for the job to become permanent. Sheridan became a Sunningdale legend perpetuated by his own book, “Sheridan of Sunningdale”.

During the Spring of 1911 the Committee received a letter from St.John’s College regarding a scheme to build an independent 9 hole course on Titlarks Farm of which received overwhelming support from members. Construction of the 9-hole course soon began. It was named Sunningdale Heath Golf Club, later to be known as the “chauffeurs’ course” or the “nine ‘ole”. After running into financial difficulties during the 1914-18 war it was taken over by the main Club with the plan to extend it in the future into a second 18 hole course for the Club.

In 1920 a proposal from the Green Committee to extend the 9-hole  course to one of 18 holes was circulated to members. James Braid was invited to advise on its feasibility, and he duly gave his view.  It was however, Mr. H.S. Colt who was named architect and in December Mr. Colt outlined his plans for the New Course which he hoped would be ready for sowing by August or September, 1922, at a cost of £8,000 plus fees. These plans were approved and the New Course was opened for play on 10th November 1923.

Over the next 90 years Sunningdale continued to grow and develop and in 2000 celebrated its Centenary year. 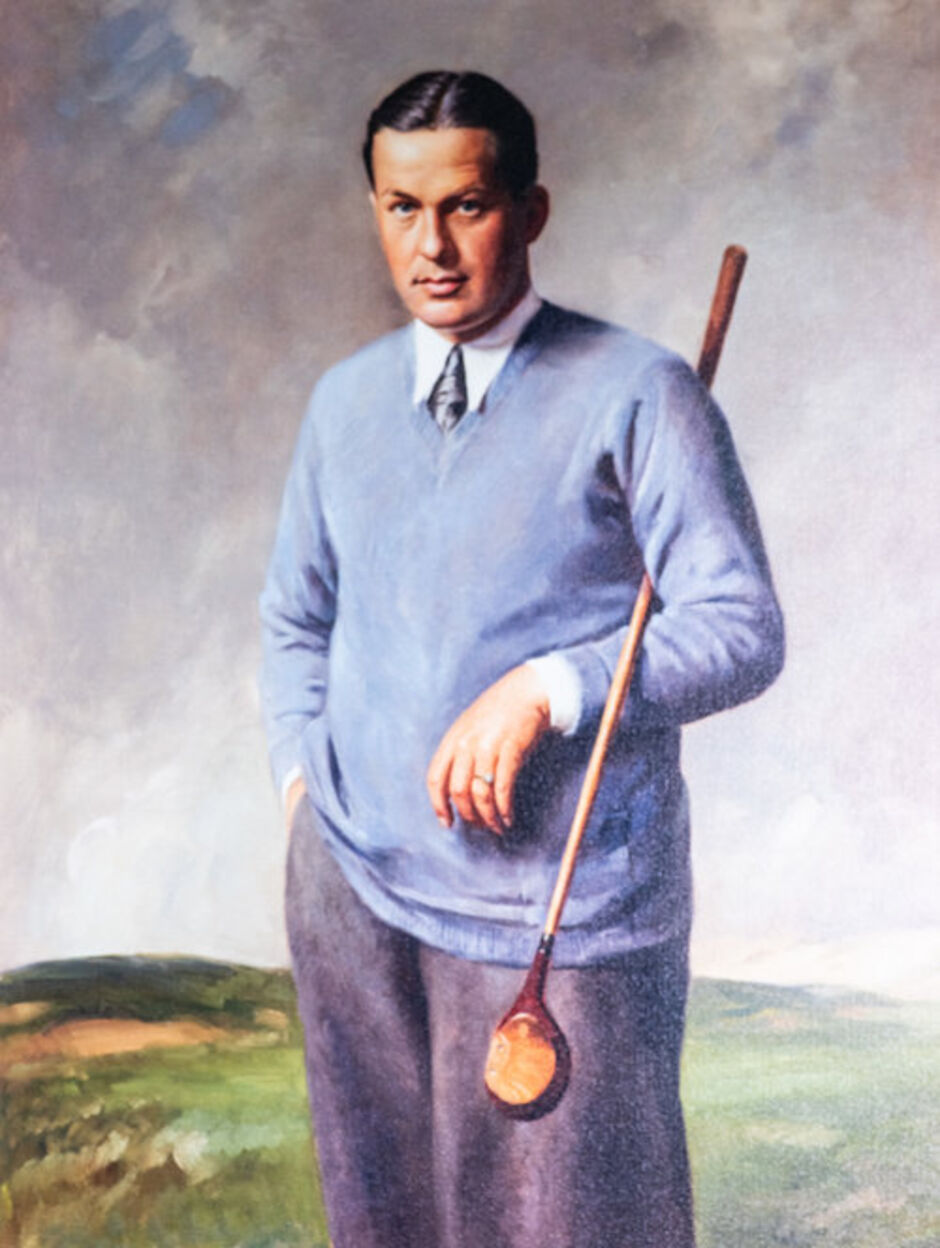 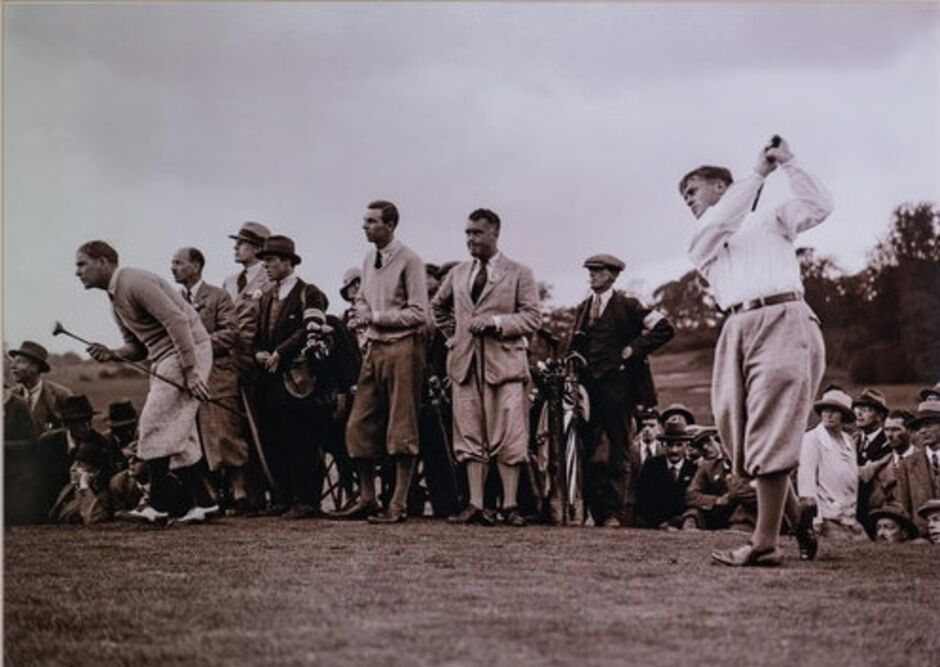 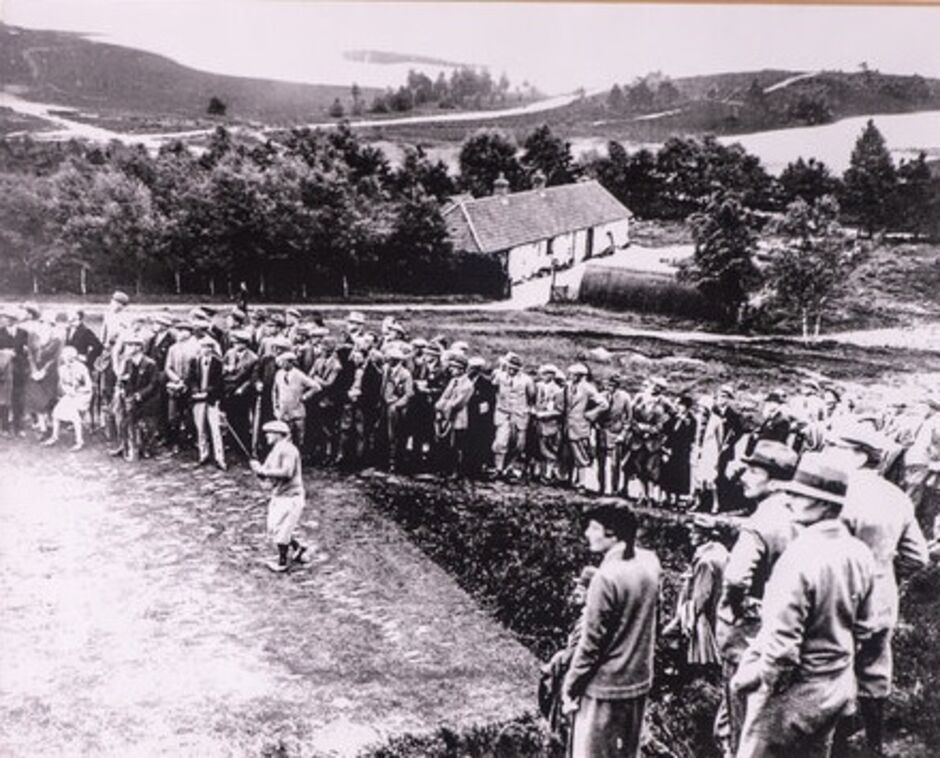 The finest round of golf Bobby Jones played was at Sunningdale on June 16th, 1926. It was his first round in qualifying for the Open Championship at the Royal Lytham and St Annes Golf Club course; 33, 33 — 66, four under the par 70 of the course, and six under 4’s. There have been lower scoring rounds, Bobby himself had scored better, but this card of 66 was played with a precision and a freedom from error never attained before or after by the greatest precisionist of them all; incomparable in steadiness of execution. There was just one single error in the round. At the thirteenth hole, a one-shotter of 175 yards, Bobby’s iron shot rolled into a shallow pot bunker, from which he chipped and holed the putt. The mistake did not cost him anything but it was single flaw in a perfect round. He had no assistance from luck and needed none. He played the first nine in 33 and the last nine in 33. He had 33 putts and 33 other shots. He had neither a 2 to bring his score down; nor a 5 to mar it. The course is 6,472 yards around on the card, but it was a great deal longer from some of the back tees used for this competition. It is especially lavish with long two-shot holes, the toughest pars. Bobby used his mashie only twice and his mashie- niblick once, his second shots continually requiring a full iron, and occasionally a brassie. He holed only one long putt of 25 feet, and to pay for it, he missed two putts of five feet, each for birdies.

Bobby had picked up a beautifully modelled driver from Jack White at Sunningdale, and he seemed to have found a sudden inspiration in it. Old Jack had named the driver, Jeannie Deans. Anything in Scotland that is beloved or heroic, is Jeannie Deans, after the heroine of that name. Bobby never played with any other driver in competition thereafter and he won ten major championships with Jeannie Deans. The next day Bobby shot a 68 — 134 in total, a new record for The Open Championship: Ten under 4’s for thirty-six holes; 66 and 68 at Sunningdale at fullest stretch, one 5 and one 2, all the rest 4’s and 3’s.

The British critics were buzzing with admiration Bernard Darwin, the greatest of the British writers said in the London Times: “After a reverential cheer at the final green, the crowd dispersed awestruck, realising that they had witnessed something they had never seen before, and would never see again.” C.B. Macfarlane of the Evening News said: “It is probably the finest golf ever seen in Great Britain. The boy’s game was perfect and chaste as Grecian statutary.” The Sporting Life correspondent said: “It would seem that in this qualifying, the limit of individual effectiveness has been reached.”

Selected extracts from the original publication

A short history of Sunningdale Golf Club from its first beginnings.

Covering the years 1901 – 13 as Sunningdale Secretary

An extract from ‘The Golf Courses of the British Isles’ by Bernard Darwin, 1910

In 1910 Bernard Darwin published his celebrated book, “The Golf Courses of the British Isles” in which there is a chapter on Sunningdale. We have extracted and digitized this chapter, which is attached. The black and white photos were not in the original book but were added for the Sunningdale web site.

Article on the course changes at Sunningdale.