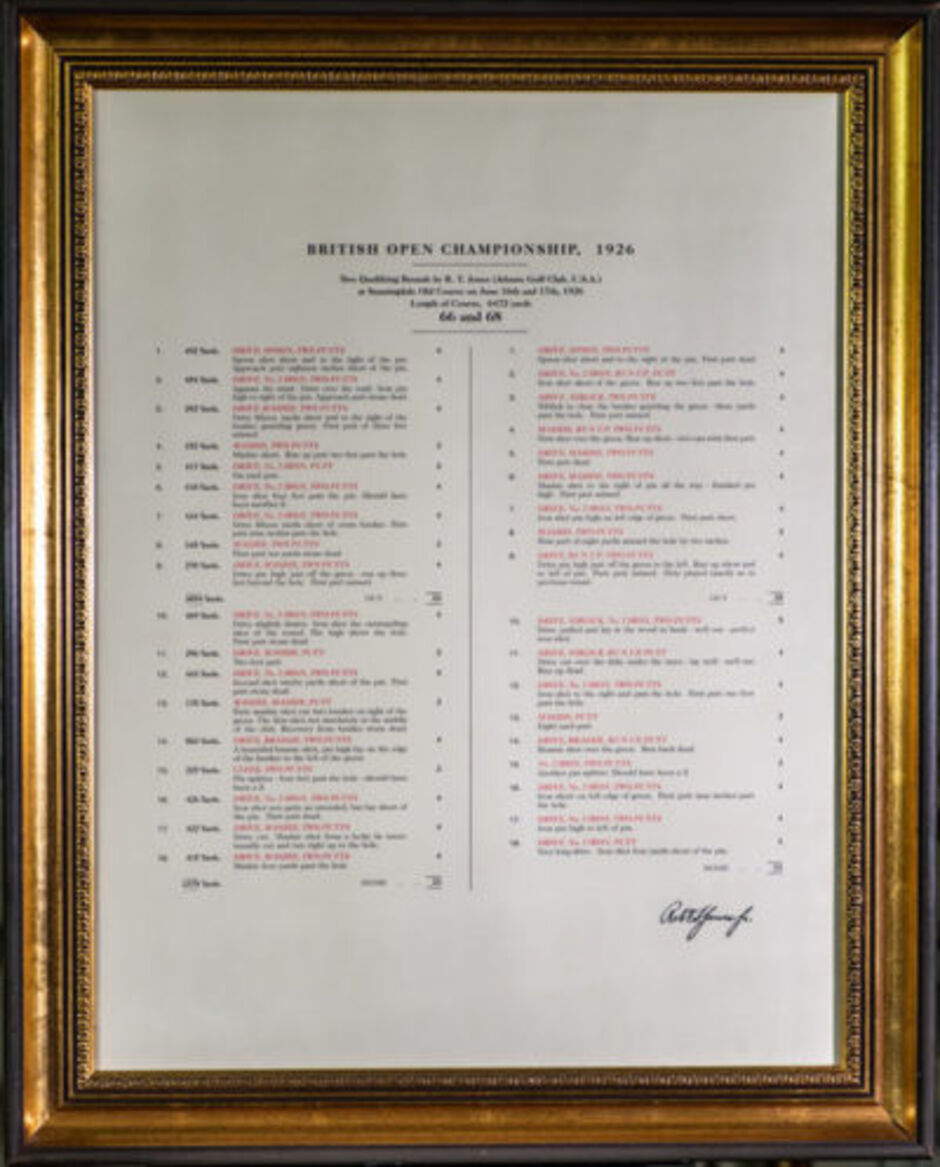 The finest round of golf Bobby Jones played was at Sunningdale on June 16th, 1926. It was his first round in qualifying for the Open Championship at the Royal Lytham and St Annes Golf Club course; 33, 33 — 66, four under the par 70 of the course, and six under 4’s. There have been lower scoring rounds, Bobby himself had scored better, but this card of 66 was played with a precision and a freedom from error never attained before or after by the greatest precisionist of them all; incomparable in steadiness of execution. There was just one single error in the round. At the thirteenth hole, a one-shotter of 175 yards, Bobby’s iron shot rolled into a shallow pot bunker, from which he chipped and holed the putt. The mistake did not cost him anything but it was single flaw in a perfect round. He had no assistance from luck and needed none. He played the first nine in 33 and the last nine in 33. He had 33 putts and 33 other shots. He had neither a 2 to bring his score down; nor a 5 to mar it. The course is 6,472 yards around on the card, but it was a great deal longer from some of the back tees used for this competition. It is especially lavish with long two-shot holes, the toughest pars. Bobby used his mashie only twice and his mashie- niblick once, his second shots continually requiring a full iron, and occasionally a brassie. He holed only one long putt of 25 feet, and to pay for it, he missed two putts of five feet, each for birdies.

Bobby had picked up a beautifully modelled driver from Jack White at Sunningdale, and he seemed to have found a sudden inspiration in it. Old Jack had named the driver, Jeannie Deans. Anything in Scotland that is beloved or heroic, is Jeannie Deans, after the heroine of that name. Bobby never played with any other driver in competition thereafter and he won ten major championships with Jeannie Deans. The next day Bobby shot a 68 — 134 in total, a new record for The Open Championship: Ten under 4’s for thirty-six holes; 66 and 68 at Sunningdale at fullest stretch, one 5 and one 2, all the rest 4’s and 3’s.

The British critics were buzzing with admiration Bernard Darwin, the greatest of the British writers said in the London Times: “After a reverential cheer at the final green, the crowd dispersed awestruck, realising that they had witnessed something they had never seen before, and would never see again.” C.B. Macfarlane of the Evening News said: “It is probably the finest golf ever seen in Great Britain. The boy’s game was perfect and chaste as Grecian statutary.” The Sporting Life correspondent said: “It would seem that in this qualifying, the limit of individual effectiveness has been reached.”